“Father, the time has come. Glorify your Son, that your Son may glorify you. 2 For you granted him authority over all people that he might give eternal life to all those you have given him. 3 Now this is eternal life: that they may know you, the only true God, and Jesus Christ, whom you have sent. 4 I have brought you glory on earth by completing the work you gave me to do. 5 And now, Father, glorify me in your presence with the glory I had with you before the world began.

It’s one thing to cheer for an underdog, but to cheer for someone who’s already lost? Now that’s stupid. Who cheers for a loser? How many people, when selecting for their fantasy football leagues, pick the biggest losers? How many people long to fail at their heart’s desire?  How many parents look at their children and think, “I hope that my beloved child marries a loser.” It’s dumb. No one wants to be associated with a loser.

So why do we have these? Why do we put up crosses in front of our churches? In our homes? Why do we wear them? All a cross is is a reminder of the biggest loser in history. It’s a reminder of a guy who dreamed big but ultimately died without glory. END_OF_DOCUMENT_TOKEN_TO_BE_REPLACED 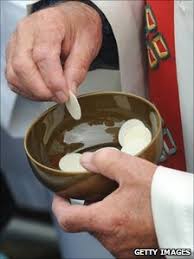 Sometimes the hardest thing to do is wait.

We recently began using both common and individual cups for Communion. That means that every week that we offer the Sacrament (usually twice a month), I pass by each communicant three times: once with the bread, once with individual cups, and once with the common cup. I’ve stressed the importance of having both “forms” of wine available: many are uncomfortable with the common cup, and there are a few members of the congregation with “shaky hands” that want nothing to do with holding a little cup and possibly spilling it. Before my arrival, I understand there were several members that refused to take the wine because only the individual cups were offered and they were afraid of spilling!

We’ve done this dual offering for a while… and frankly, it makes communion rather a long process. I’ve considered asking one of the councilmen to help me with distribution, but the men of the council much prefer taking a back seat. They’ll help in any number of ways, as long as it doesn’t put them in front of people. They are faithful servants, though their gifts tend to skew in one direction.

Until this past week.

One of the councilmen asked me, “Pastor, we had a lot of people at communion last week. It sure took a while, didn’t it?”

I agreed with a smile. I don’t mind taking time for communion so every member can partake of the feast!

“Pastor, would it help if I helped you with handing out the communion stuff?”

Well, this coming Sunday, I get to have an assistant at distribution! How awesome is that? A member of Christ’s body saw a need and wants to help fulfill that need. If I had pushed or mentioned it ahead of time, the need wouldn’t be seen. Some in the council would likely had thought that pastor was just seeing problems where there weren’t any. Because I waited, the need was seen.

…now I just need to work on timing and presenting problems so they already know the problems exist!

Mark 9:2-9 2 After six days Jesus took Peter, James and John with him and led them up a high mountain, where they were all alone. There he was transfigured before them. 3 His clothes became dazzling white, whiter than anyone in the world could bleach them. 4 And there appeared before them Elijah and Moses, who were talking with Jesus.

5 Peter said to Jesus, “Rabbi, it is good for us to be here. Let us put up three shelters—one for you, one for Moses and one for Elijah.” 6 (He did not know what to say, they were so frightened.)

7 Then a cloud appeared and enveloped them, and a voice came from the cloud: “This is my Son, whom I love. Listen to him!”

8 Suddenly, when they looked around, they no longer saw anyone with them except Jesus.

9 As they were coming down the mountain, Jesus gave them orders not to tell anyone what they had seen until the Son of Man had risen from the dead.

I live in the real world.

My wife gave birth to our third child this morning. Apparently it’s a big deal.

Now, I love this kid. He’s awesome. He’s a blessing given by God, and it’s a blast to see him lying right over there while I’m typing this in the hospital. He’s my third, though, so I’m familiar with all this. Yes, still a blessing. Yes, I need to remember how small and fragile these kids are when they’re born. But I’ve been this route a few times before.

I expect close friends and family to be happy with us. It’s no surprise that grandmas and grandpas and close family are celebrating. We’ve done this before. Again, I know what to expect.

This is the first time we’ve had a child while I was a pastor, though. And… well, the excitement of the congregation is a little overwhelming. So many congratulations and wondering when we can visits and offering to helps and so on and so on… and it’s hard for me to figure out what I “should” say yes to and what being a good husband and father necessitates me saying “no.” We’ve had such an outpouring of generosity — for instance, people have fought to take care of our other children while we’re in the hospital. It’s a bit of a balancing act to not offend anyone!  END_OF_DOCUMENT_TOKEN_TO_BE_REPLACED

41 Filled with compassion, Jesus reached out his hand and touched the man. “I am willing,” he said. “Be clean!” 42 Immediately the leprosy left him and he was cured.

Where do you go with your troubles?

Last week I had a major struggle. We had the first session of our new BIC. I invited a good number of people, including many lapsed members. I wanted to give them an “easy-in” to get back to church — no pressure, not Sunday morning, nice and simple.

We had nine people attend the first session! …and every single one of them were either members in good standing of our church or sister congregations.

It’s not on me. I’ve made the invitations. I’m not the one responsible for converting anyone. I know that in my head. I know it in my heart when something good happens, it’s not my doing. Those five adult confirmands we had about a month ago? So not my doing! I’m not an evangelist! That was all God.

But for some reason I shouldered the burden of the failure. I felt the weight of having not a single lapsed member or prospect come.

Still, I couldn’t sleep that night. It kept going through my head: what could I do different? And yes, it is good to learn from this and perhaps try a different tactic in invitations. Some of those I invited I had not spent time with — if they don’t know I care, why would they care what I know? Perhaps that’s the biggest take-away from no one coming for me: I hadn’t put the time in.

So I repented that night. Oh, and the next day. And the day after that. Stupid sin just kept clinging. Get away from me, sin! Get away and stay away!

You want to know what’s cool, though? God forgives. And he doesn’t forgive because I repent. He just plain ol’ forgives. He bought me with his own blood, and he delights in taking my guilt away. I have nothing to worry about.

So let’s hope my heart learned its lesson. I’m not God. I need to let him do his job!

29 As soon as they left the synagogue, they went with James and John to the home of Simon and Andrew. 30 Simon’s mother-in-law was in bed with a fever, and they told Jesus about her. 31 So he went to her, took her hand and helped her up. The fever left her and she began to wait on them.

32 That evening after sunset the people brought to Jesus all the sick and demon-possessed. 33 The whole town gathered at the door, 34 and Jesus healed many who had various diseases. He also drove out many demons, but he would not let the demons speak because they knew who he was.

Jesus Prays in a Solitary Place

35 Very early in the morning, while it was still dark, Jesus got up, left the house and went off to a solitary place, where he prayed. 36 Simon and his companions went to look for him, 37 and when they found him, they exclaimed: “Everyone is looking for you!”

38 Jesus replied, “Let us go somewhere else—to the nearby villages—so I can preach there also. That is why I have come.” 39 So he traveled throughout Galilee, preaching in their synagogues and driving out demons.

END_OF_DOCUMENT_TOKEN_TO_BE_REPLACED

Tomorrow we start my second round of BIC. BIC stands for Bible Information Class. It’s basically adult confirmation class. Through the classes, we teach the basics of Scripture using the outline of Luther’s Small Catechism. The first time I taught BIC here, God used it to bring five adults to be confirmed. It was a blast!

But… some things are going to be different this time around. For one, I’ve avoided the words “class” or “study.” Instead, I’m describing it as “thirteen sessions where we get to talk about God.” I’ve found that the word “class” in particular can cause some bad associations. I want to stress the discussion aspects. By using the generic term “God” we also get rid of some of the offensiveness in the invitation itself. I’ll save the offense of the Gospel and who Jesus is for our time together.

This is just basic publicity, though. It’s advertising certain aspects of the BIC to maximize interest in the intended audience: those who don’t know Christ.

I’ve done something very different in targeting people to invite, though. Yes, I’ve made a point of inviting those who are not church members. I’ve worked with church members who have friends that are unchurched. Together we’ve invited as many as we could. But I’ve also targeted a third group: The dechurched.  END_OF_DOCUMENT_TOKEN_TO_BE_REPLACED