“Yes, I’m sinning. I know I’m going to hell. But my happiness for the next year or two is more important than anything else.”

She didn’t say that. Well, not in those words. That’s what she told me, though.

I visited the woman. According to my files, she still belongs to the church, though I’ve never met her. We’re trying to visit every person, update church records, and encourage those who haven’t been around to come back.

She told me outright she’d been living with her boyfriend for the last seven years. Someday they’re going to get married; just not yet. She told me they hadn’t been to our church for years, because two pastors ago, the pastor told her not to come to communion as long as she was living in sin. Oh, but don’t worry. She’s been attending a different church and having communion there.

So, why did she still consider herself a member of my congregation?

“I have history there. That’s where I belong.”

But you’ve been attending a different church. You didn’t even know I was your pastor, and I’ve been here for a good year and a half. I know you’ve received invitations to come back; we have this address on file, and we’ve sent out at least five, six postcards and called to invite to various events.

“If you want to remove me, that’s your choice.”

No. That is not what I want. That is your choice if we remove you. It is a recognition of what you’ve done. END_OF_DOCUMENT_TOKEN_TO_BE_REPLACED 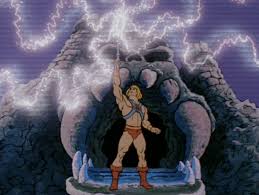 Prince Adam grabs the Power Sword and holds it aloft. He cries out, “By the power of Grayskull…” Streams of energy shoot forth from the sword. He is bathed in a swath of light. His muscles bulge. He grows. He changes. He becomes… He-Man! He completes the transformation and declares, “I have the power!”

He beholds the sword in his hand. “Meh,” he finishes.

Yeah. I’m pretty sure that’s never happened in any iteration of the 80’s hero. You don’t declare you have amazing power and then shrug your shoulders and say, “Whatever.”

…but what if you do? END_OF_DOCUMENT_TOKEN_TO_BE_REPLACED

Not everything a pastor writes gets into a Sunday sermon, and that’s probably a good thing.

I was prepping for next week tonight. (Yes, I started working on next week’s sermon a few hours after this week’s is done.) It’s from John 10:22-30. There, Jesus says that there is no way that any sheep in his hand can be plucked away. And then he adds that the sheep are in his Father’s hands. After all, he and the Father are one.

Because Trinity. That’s why.

That fantastic line isn’t likely to make it into a sermon, but it’s right there in my notes as I went through the original Greek. END_OF_DOCUMENT_TOKEN_TO_BE_REPLACED

I’m a superhero. And not in a good way.

Especially in the silver age of comics, it was very common for the super hero to have a date as his secret alter ego. Clark Kent might have a chance for a date with Lois Lane. Peter Parker finally has that date with Gwen Stacy. Barry Allen and… oh, I never read much Flash.

And then, a superhero crisis happens, and because he’s the good guy, the superhero rushes off to save the day. Of course, this makes him late for the date. In the end, he was the good guy, but suffers because of it. Or, at the least, his relationship suffers for it.