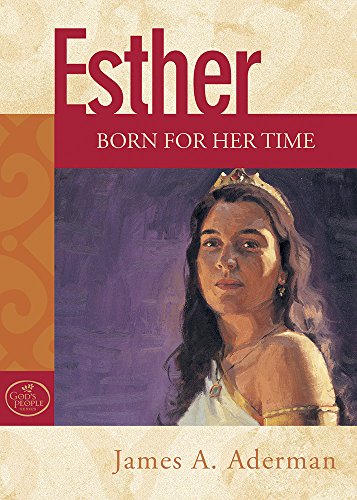 Esther: Born for Her Time
by James A. Aderman

Esther knows that the moment she enters the king’s throne room, his guards will slay her. They are trained to kill any who approach the king, no matter who it is. And yet Esther moves forward, lump in her throat, determined to speak to her husband the king or die trying. And so begins the story of Esther in this volume of God’s People.

I have loved the story of Esther since I first encountered it as a radio drama on Adventures in Odyssey (a two-parter!). Ever since then, I’ve enjoyed retellings. There’s this fun Purim song (sung by the Maccabeats!). There’s a neat retelling set in modern day.

And now there’s this.

Aderman aims for a faithful retelling of the biblical narrative, and he does a fantastic job. There’s a bit more telling than showing than I prefer, but what he tells fills in gaps that I was unaware of – for instance, we find out where in Persia’s history Esther lies and how it compares to Persia’s conflicts with Greece. I’d never known that! (And now I imagine 300 going on in the background of Esther and it fits right in!)

Aderman makes a conscious choice (and makes it explicit) to leave mentions of God out of the story. After all, the biblical book Esther doesn’t mention God once! Yet he’s around in the background, and Aderman does a great job giving “hints” in how he writes.

Basically, this is one of my favorite stories, and this retelling is faithful to the original. I recommend it.

Esther puts her hand against the wood paneling of the door to the throne room. She whispers to herself, “If I perish… I perish.” She pushes the door open.

The king’s guards turn and draw their blades. The king has summoned no one. The only reason anyone would have to come in here without being summoned is to assassinate the king. The law is clear: Kill any uninvited guest.

Esther holds her hands out, showing she is unarmed. Her only chance is the mercy of the king. The guards tense to strike.

And Xerxes extends the golden scepter. The only thing that would keep any uninvited guest safe. “What do you want, my queen? Ask it, and it’s yours.” Xerxes smiles. His queen. The one he chose. His queen.

Haman. The man who had masterminded a new law: On a certain day in the twelfth month, it will be legal to kill any Jew and take their possessions. He doesn’t know the queen is Jewish.

But neither does the king. END_OF_DOCUMENT_TOKEN_TO_BE_REPLACED

“My queen!” one of the eunuchs rushes to Esther. “My queen! Your friend. The one out in the gate. Mordecai? He’s going to be punished!”

Esther sits up. “What? What’s happened?”

“He’s wearing sackcloth, your majesty. Anyone who’s mourning isn’t allowed in the king’s gate. I tried warning him, but he’s still just sitting there in the gate crying out!”

What could be wrong? Why would Mordecai do this? Esther looks at the eunuch. “Go to the market. Purchase him some appropriate clothes. Bring them to him. He won’t refuse a gift.”

“Yes, your majesty.” He rushes out. Esther paces the harem. What’s wrong with Uncle Mordecai? What’s happened that he’s mourning, and so loudly, and in a place that will kill him? END_OF_DOCUMENT_TOKEN_TO_BE_REPLACED

His adopted daughter is queen. Mordecai still misses her. He waits by the gate for word from Esther. One day a trumpet blasts. Every noble passing in and and out of the gate, all the guards, everyone drops to the ground on their faces. And as they do, a man in regal robes and a massive black curly beard passes through.

Mordecai looks at all the people groveling on the ground. Clearly this noble passing through is some big-shot, someone very full of themselves. Now Mordecai has no problem showing respect, but he’s got a big problem worshiping anyone but Creator God. And these people aren’t just showing respect. At least, that’s not what it looks like. So Mordecai stays on his feet.

A man with a perfect oiled beard and orange-colored robes stands up next to him after the noble has passed. “What’s wrong with you? Why didn’t you bow down to Haman?” END_OF_DOCUMENT_TOKEN_TO_BE_REPLACED

Hadassah’s parents’ voices were filled with longing. “Someone is coming to save us. The Savior will be born back home in Israel, from our people. He is coming to redeem us from our sins. And our God will not forget his promises.” They told her of God’s faithfulness to sinners like Adam and Eve and Noah and Abraham. They filled her with wonder that God wold love sinners like her no matter how bad she was. They told her, “And we have a promised land, Hadassah. So many of our people already went home. And someday we will go, too. We’ll leave Persia and go to the land our God promised us.”

And then… her parents died.

Hadassah went to live with her older cousin Mordecai. He told her those same promises over and over again.

And then the king exiled his queen. And then he got lonely. And then there was a contest. And Hadassah was taken. She was pried out of her home by the king’s guards, stolen from the man who had raised her, kidnapped by the government from Mordecai. As the guards marched toward their home, Mordecai grabbed Hadassah. “Don’t tell them who you are. Go by your Persian name!” He knew how dangerous it would be to be a minority, especially if the king’s eyes were on you. And so she was known as Esther.

And then Esther won the contest. She pleased the king so much, he threw a week-long party to celebrate. END_OF_DOCUMENT_TOKEN_TO_BE_REPLACED

Hadassah lugs the clay jar back home. Susa’s dust swirls around her ankles. The capital city of the Persian empire is relatively quiet at this hour; the women gossip at the well, and over at the market the men grumble as they set up their stalls. The sun peaks over the roofs of the buildings around her, sending golden light everywhere. She breaths a morning prayer of thanks to Yahweh. “Creator, you make the sun to shine on us. Bless this day and bless this water. Give us life. Move us to be thankful. We look for the One you promised would come. Watch over those Jews who have gone home. Bring us home to Israel someday. And help me have a good birthday.”

She comes to the orange clay wall that hides her home. As she rounds the gate to the front garden shadowed by two date trees, she sets down the jar and wipes the sweat from her forehead. Today she is fifteen. Maybe Uncle Mordecai will finally tell her who she’s going to marry. Most of her friends are already married. Chava’s going to have her first baby soon! She hoists the jar to carry into their little home.

Somewhere in the distance, someone screams, breaking the quiet morning air. And then another person screams. There’s weeping far away, carried over the clay roofs of the city. END_OF_DOCUMENT_TOKEN_TO_BE_REPLACED