So I saw this article recently. You can go through the pics yourself; you don’t need me giving you any commentary on each one. (Though I’ll say I only looked at the pics and didn’t read the accompanying notes or anything, so please forgive me if there’s anything offensive there!)

I love the idea of this. I know that it’s something so many people struggle with. They see the curated supermom pics on social media, and it hurts. “I don’t do that. I’m a bad mom.” Sometimes it’s said with a laugh. Sometimes it’s even said with pride. There’s a growing recognition that not every mom needs to look the same, and that’s ok.

My heart grew as I looked through these pics.

END_OF_DOCUMENT_TOKEN_TO_BE_REPLACED

So I’ve been listening to this song a fair amount lately.

The lyrics have been touching me in a profound way.

When I go don’t cry for me
In my Father’s arms I’ll be.
The wounds this world left on my soul
Will all be healed, and I’ll be whole.

And I ache for that. END_OF_DOCUMENT_TOKEN_TO_BE_REPLACED

Photo by cottonbro on Pexels.com

So today’s my birthday. I’m… well, I’m about that old. Doesn’t matter. And from my congregation, previous congregations, old friends, I’m getting all the “happy birthdays.” Some of them are pretty standard, “Happy birthdays!” but some are pretty heartfelt. Like, people actually saying things that are meaningful. Things that say I mean something to them.

And… and it hurts.

No, I’m worse than a nothing. I’m complete junk. Worthless.

So, can you tell that my depression is having fun today? END_OF_DOCUMENT_TOKEN_TO_BE_REPLACED

Photo by Skitterphoto on Pexels.com

I just finished mowing the lawn.

It’s not a huge lawn, but it’s certainly bigger than my house’s. I’m a little tired out. My son was there, and our member in charge of grounds and properties was also there. We were a three-person strike force, smiting weeds and cutting down grass that had gotten too big for itself!

It’s the first time I’ve ever mowed a church lawn, even though I’ve been a pastor for about a decade. And… that’s kinda dumb. See, I’ve got a philosophy when it comes to manual projects at church:

If only pastor is doing it, there’s probably something wrong.

If pastor never does it, there’s probably something wrong. END_OF_DOCUMENT_TOKEN_TO_BE_REPLACED

Photo by Kat Jayne on Pexels.com

So, I’ve been feeling a bit down. I thought I would find something to give voice to the emptiness of my heart. In the past, the Psalms of Lament have comforted me and helped me phrase my sorrow. (Psalm 13 continues to be my favorite of those.)

In my devotion collection was a book I hadn’t read yet: Blessed is the Man: A Man’s Journey through the Psalms: Psalms of Lament. Blessed is the Man is a devotional series for men (as you might guess). Each book looks at a different variety of psalms; psalms of praise, Messianic psalms, and this one… psalms of lament. I thought it might be good to check out, given the state of my heart.

I read the entire book this last week. It investigates six psalms over six weeks, with a devotion for each weekday. It’s a good format. Each devotion examines a portion of a given psalm, until at the end of the week you’ve journeyed through the whole thing. Most of the devotions were well-written and properly talked about each section of verses.

By the end, though, something was clear: The authors did a great job examining trees, but they never discussed the forest. END_OF_DOCUMENT_TOKEN_TO_BE_REPLACED

Photo by cottonbro on Pexels.com

So, yesterday I was grieved by our decision to keep the church’s doors closed for almost another month.

Today… I was not better. I woke feeling very down. I drove to church to memorize the sermon and record this week’s digital worship. And when I got to church… I couldn’t work. I couldn’t concentrate. There was only the desire to weep.

I stalled. I did some other things. Eventually I got to revise the sermon and then memorize it. I felt a little better. Being able to speak about Jesus and his forgiveness and love helps. But… I was speaking to a camera, not to my people.

But by the late afternoon, I was again in a funk. Just… done. My wife kicked me out of the house to just drive for a while, which usually helps at least a little. And it did. A little. END_OF_DOCUMENT_TOKEN_TO_BE_REPLACED

Photo by Tim Mossholder on Pexels.com

I nearly wept tonight at a church council meeting.

And I am not angry at my council. These men, I think, made a prayerful and wise decision. I agree with them.

Most of the meeting addressed one thing: When and how will we reopen the church? The virus has had us locked down for about two months. We miss each other. We miss worshiping together. We long to be together.

Legally, as of May 24th – about a week and a half away as I write this – we can gather again. Should we? If so, what precautions should we take?

And we wrestled. How do we best show love for God and each other? How do we care for each other in this time? END_OF_DOCUMENT_TOKEN_TO_BE_REPLACED

Photo by Pixabay on Pexels.com

A tree sundered in a recent windstorm. Cracked right down the middle, right next to the church building. Could cause a lot of damage if it fell the wrong direction. This morning, we had a workday of sorts, with my family and two other families coming together to take it down, chop it up, and take care of all the various pieces.

We observed distance rules, but we all chatted as we worked. Let me tell you, it was glorious. My kids worked hard. It’s good to see them serve like that! And to have adult conversation in person with someone besides my wife? Look, I love my wife so much, but it’s good to talk to other people, too! It wasn’t ministry-heavy at all; just a chance to chat with friends.

We labored for about four hours, hauling branches. It was hard work, but well worth it. I knew I’d be wiped out when I got home. And what a surprise: I was tired! After lunch and a shower, I took a nap.

I wasn’t expecting the social whiplash, though. END_OF_DOCUMENT_TOKEN_TO_BE_REPLACED

The stone being rolled away from Jesus’ tomb.

On a usual Holy Week, I’ve worked my butt off to get three (at a minimum) services ready. All the sermons memorized. Making sure the screens, the bulletins, the musicians are all ready to go. It means I get to journey from the upper room to the cross to the empty tomb with the Christian family I am a part of. It means lots of special music and special food. 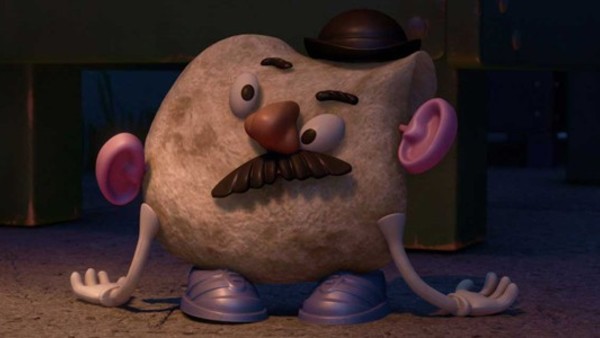 The congregation is Mr. Potatohead.

So right now, the congregation can’t come together. We are denied our weekly worship. We cannot commune together as we normally would. And potlucks? Right out!

But we are still one body in Christ.

We’ve been finding unique ways to exercise that oneness. Every week I prepare worship and post it on Youtube for the congregation to watch. But Sunday morning, I also host fellowship and Bible study time, three times every Sunday morning. The congregation lets me know which one they want to come to. I send invitations to those who want them, and we video conference for about an hour at a time.

Why divide it up into three and not do it all at once? This way, the group is small enough that we can actually talk to each other. It’s not just me talking at a bunch of faces; it’s actually seeing and talking with each other.

And I gotta tell you: It’s awesome.

The congregation is asking about one another, calling one another, supporting each other. I’ve got a few people coming to every single video conference so they can see everyone and encourage more people.

We are apart. But we are still together. And it is Jesus that unites us. He’s our head.

You can separate the body of Christ, but you cannot separate us from Christ. He holds us fast. And as long as he’s got us, well, we’ve got each other too, don’t we?

And as Jesus longs to be with us, as his love moved him to leave heaven to rescue us, we long for each other. We can’t be together now, but we still long to be together.

We’ll be together again.

Maybe not in this world, and that’s ok, too. It means we get to party together before the Throne.

And there, nothing will ever separate us again.