Plan B
by Pete Wilson

What happens when God doesn’t show up the way you thought he should? What happens when your life falls apart and you need to go with “Plan B”? In the aptly-titled Plan B, Pete Wilson walks through several people in the Bible that had to go with Plan B and what happened with them. He then applies these lessons to our lives today. In the end, he points that we can trust God, because he knows what he’s doing.

Like many books I’ve read, this one really frustrated me.

At first, I thought that I was going to end up simply throwing it out. He paints King David as someone who turned his back on God often. For instance, when he runs from Saul fairly early in his life, Wilson writes, “He turns his back on God and he tries to take things into his own hands” (16). He also bluntly uses the theology of glory: “See, God is teaching his people: I have so much power, and I want to manifest it in your life. But if you want to see my power, you have to take the risk. You have to take the step. You have to take the spiritual risk of trusting me first” (44). END_OF_DOCUMENT_TOKEN_TO_BE_REPLACED

Photo by Li Yang on Unsplash

I have survived the dreaded Easter. Am I surviving recovery?

Mostly. I am so, so thankful I serve a smaller congregation where I can rearrange things and take a week mostly off. I canceled nearly all my meetings for this week, and had worked ahead so that there was very little office work. That doesn’t mean the week has been easy, though.

Sunday night was bad. My brain would not shut off. I kept on going over Easter worship that morning. “I should have spent more time with him. She’s going to think I’m a jerk, because I was. They left pretty quick – what did I mess up?” There was this paranoia setting in that everything was going to fall apart because I messed up again and –

I ended up taking out a book and reading most of it to try and shut my brain up. (Thankfully Dragon’s Blood by Jane Yolen held my attention pretty well!) And even after finishing that book… my brain wouldn’t stop. I eventually passed out, but it was a struggle to get there. END_OF_DOCUMENT_TOKEN_TO_BE_REPLACED

Pastor Care under the Cross: God in the Midst of Suffering – Revised Edition
by Richard C. Eyer

Where is God when people suffer? God suffers with them on the cross. In this excellent book, Richard Eyer guides pastors with multiple practical applications. He begins by laying out the theology of the cross, and then in subsequent chapters applies that theology to various suffering groups: the elderly, the dying, the mourning, the depressed, and others. In the end, he always points to Jesus as showing that God is with the sufferer.

I love Eyer’s definition of pastoral care: “Pastor care consists not in removing someone’s suffering but in helping the sufferer learn to interpret his or her sufferings in the light of the cross” (21). So much of our culture focuses on taking away suffering of any kind, even saying that life isn’t worth living if it’s going to involve suffering. Eyer reminds us that Christians have a different outlook. The point of life isn’t escaping suffering; it’s Jesus. “The goal of pastoral care is not necessarily to remove a person’s discomfort, but to help the sufferer use the discomfort for growth in faith and love of God” (71). END_OF_DOCUMENT_TOKEN_TO_BE_REPLACED

Photo by Jordan Whitfield on Unsplash

Twenty-four hours ago, I dreaded Easter morning worship. It was coming. It was well-planned. I had practiced it several times.

I wanted nothing to do with the upcoming worship service.

The people. Oh, the people. I had been without rest for so long, it seems, and now nearly any interaction I had with a person for longer than a few minutes would bring me down. It wore at me so much that depression was able to gnaw at my soul.

And Easter morning? Do you have any idea how many people I’d have to interact with?

Out of a Far Country
by Christopher Yuan & Angela Yuan

On May 15, 1993, Christopher Yuan came out of the closet to his parents. His mother gave him an ultimatum: Take that back or get out. He chose to leave. Finally free of his parents, Chris flung himself into his new family who supported his homosexuality. His mother, though, turned suicidal. Through the following years, both hit rock bottom, and God brings them to himself. This is their autobiographical story.

First off, this book is about 95% solid. It is a true story, and neither Chris nor Angela hold anything back about their struggles.

In one telling part, Angela, who had been an atheist, makes a startling realization: “A person’s attempt to prove his righteousness was the very thing that kept him from understanding God’s love for him” (31). Angela realizes that she’s a sinner, and she doesn’t have to hide that. She ends up walking around in a joyful daze muttering, “I’m a sinner! I’m a sinner!” Later on, she makes a great connection: “We’re all sinners, and knowing that helped me stop worrying about what other people thought” (72). If you want a book that shows the implications of Law and Gospel in a modern-day context, this book is great. END_OF_DOCUMENT_TOKEN_TO_BE_REPLACED

Easter begins with a trumpet fanfare.

That’s the way it is every year here. A family here has three generations of trumpet players, and they join together in a beautiful prelude to our worship. It is loud and boisterous and wonderful.

Thinking about it makes me nauseous.

Not because the family is unfaithful; they are faithful in worship and growing in Christ. Not because they’re not talented; all three are different kinds of professional musicians. Not because I don’t like the arrangement they’re playing; I mean it when I say it’s beautiful.

I’m nauseous because I’ve OD’ed on people in the last month, and this last week and a half before Easter, it’s only going to get worse. See, when I spend too much time with people, I deplete my energy. And the lower my energy, the easier it is for my depression to attack. And for the last month, I’ve not had time to recharge.

As I think ahead to Easter morning, to the big smiles and the trumpets and the singing and the people and the crowds and everything – it’s too much. It’s too loud. END_OF_DOCUMENT_TOKEN_TO_BE_REPLACED

Girls have questions about their changing bodies and what lies in store for them. In Sex & the New You, girls and their parents can find good information about basic sex education, getting them ready for current and future changes.

Like the boy’s edition of this book and the editions aimed at those just a little younger, this book is basically pretty good. It presents solid information and has good, Bible-based discussion on topics such as sexting, STD’s, and pornography, while keeping it pretty age appropriate. I have little to complain about. END_OF_DOCUMENT_TOKEN_TO_BE_REPLACED

Photo by Julien-Pier Belanger on Unsplash

Ever try reading the Biblical book of First Chronicles? It can really be a slog. There’s a lot of, “Oh, and this guy had this son, and he had this son, and that first guy had another son, who had these three kids.” Basically lots and lots of lists of names.

And that’s what I’m reading right now for my personal devotions.

Now, I try to get through my Bible roughly every year or two years, so this is hardly my first time through this book. I’ve read it before. And usually it’s just something I skim. I mean, really, why did God see fit to put in so many names of people that aren’t attached to anything we see in history? They apparently don’t have some pivotal role in the history of redemption. They weren’t used by God to preserve Jesus’s line or deliver any new promises or prophecies.

They’re just a bunch of names. A bunch of nobodies, and God wanted to make sure that we saw their names. You know, all the names in the credits at the end of a movie at least have imdb entries! These guys? I suppose a bunch of them probably have some sort of Christian fanfic written about them (sort of like all the Star Wars fanfic out there), but that’s not the same thing.

But as I’ve been reading through this time, I’ve noticed something: END_OF_DOCUMENT_TOKEN_TO_BE_REPLACED 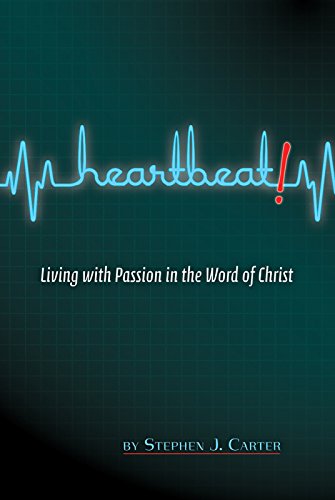 Do you long to live with passion for God’s Word? You know you’re supposed to, and you understand that the Good News that Jesus is your Savior is overwhelming, but something just doesn’t connect? In this book, Stephen Carter looks at the examples of those who live with passion for God’s Word, examines what lies in the way of our living with passion, the importance of confession, how to discover the Word of Christ, how to dwell in that Word deeply, and how to live out that passion in the world. Carter himself explains his goal: “God’s heart beats through His Church, gathered around His Word and Sacraments. His heart beats in you through Baptism as you immerse yourself in the Word of Christ. Consequently, your heart will beat with God’s passion for the world as you praise him, serve others, and bear witness to your faith in Christ daily and throughout your life” (22)

When I started this book, I quickly became very worried I was wasting my time. First off, Carter is fine with his theology. I didn’t notice him saying anything wrong at all. He’s very Gospel-centered, for which I am grateful. However, the first fifty pages are supposed to be examples of people who live with passion, which will show us why living with passion for God’s Word isn’t just some good ideal, but something we want to pursue.

Except… after reading those fifty pages, I was frankly bored. END_OF_DOCUMENT_TOKEN_TO_BE_REPLACED